A Saint Joseph School alumna recently represented the entire Mountain State as a page for the U.S. Senate.

Faith Lanham, 17, was the only page from West Virginia recommended by U.S. Sen. Joe Manchin, D-W.Va. A statement from the senator’s office said Lanham met all the requirements, wrote a great essay and had good academic standing.

She and 25 pages from around the country lived in Washington, D.C., from the end of January until June 10. The Daniel Webster Senate Page Residence, a few blocks from the Capitol, served as their home and school. She was one of 16 who worked on the Democratic side, while 10 served the GOP.

Nominated by senators, pages must be high school juniors, at least 16 years old and attend school, according to the U.S. Senate website (www.senate.gov). Their duties include delivering correspondence and legislative material in the congressional complex, preparing the chamber for Senate sessions, and carrying bills and amendments to desks.

Lanham summarized her role as “making sure everything runs smoothly” for the senators.

“The Senate would not work nearly as well without its pages,” the statement from Manchin’s office said. “Not only do pages make deliveries of correspondence and legislative materials throughout the Senate complex, but they also work directly with Senate floor staff to ensure the Senate chamber is prepared for session.”

The Martinsburg resident became intrigued by the page program when a friend of hers participated in the spring of 2020. She applied in October 2021, and had three interviews – one on the phone and two via Zoom – with Manchin’s office personnel before being accepted in early November.

She said the first three to four weeks were nerve-racking as she learned the ropes, but the responsibility became easier to bear as time went on. The rising senior at St. Maria Goretti Catholic High School in Hagerstown, Md., and her fellow pages kept a rigorous schedule, rising at 5 a.m. every weekday so they could eat and be ready to start classes at 6:15 a.m., in which they studied math, science, social studies and English.

They reported to the Senate at about 8:15 a.m. to prepare the chamber for sessions, which  began around 10 a.m. Shifts varied, with some wrapping up at 6 p.m. and others much later, when the senators completed their business for the day. The teens then had homework to do, as well as chores at their residence, such as restocking the kitchen with items delivered there or cleaning their rooms.

To ensure the pages were not distracted and didn’t share information they learned during Senate proceedings, they were not allowed to use cellphones or other electronic devices, except for listening to music. They had landlines for making phone calls to home.

Lanham said there was little idle time for texting or Googling anyway, and the pages stayed abreast of current events by listening to Senate speeches every day.

Among the most valuable lessons Lanham learned were how to peacefully coexist with people having all kinds of personalities and how to work together diplomatically.

“My worldviews shifted in terms of how to approach situations and how to have a nuanced conversation,” said Lanham, who is on the honor roll and participates in theater at Goretti.

She witnessed diplomacy in action in the Senate chambers, watching government officials converse civilly about sensitive topics, “which helped us as high school students understand how to talk about these issues with one another.”

Lanham is no stranger to politics. She worked on several political campaigns, including those of Sen. Jon Ossoff, D-Ga.; Sen. Edward Markey, D-Mass.; and Hillary O’Connor Mueri, a Democrat who ran unsuccessfully in 2020 for the U.S. House in Ohio. She also is the director of publications for the High School Democrats of America’s Latinx Caucus, and is executive director and leader of the Hagerstown chapter of Coalition Z, a national, youth-led organization striving for political change.

But being a Senate page was her first real job and she faced a lot of adjustments.

For instance, she is an only child who tends to do more listening than talking in group conversations.

But living in tight quarters with what she described as a lot of “go-getters,” there wasn’t much of a chance to fade into the background.

“There’s no room to sit back and not say anything,” Lanham said.

While she’s used to being busy, she admitted that the highly scheduled semester was tough sometimes.

“You have very little control over your own life. It’s really tiring,” she said.

But there were many positives.

“The pros are definitely meeting the people, the experiences you have,” Lanham said. “By the end of the program, you come out with three or four close friendships. I think it was a good time to be away (from home). I got to really connect with people.”

This summer, Lanham is an intern with the Democratic Party of Arizona while taking algebra, psychology and English courses at Hagerstown Community College. Throughout the year, she also is an intern for Climate Action in Pennsylvania.

In addition to pages completing their studies, the goal of the page program is for participants to gain a fundamental understanding of how the U.S. Senate and the federal government work, according to information provided by Manchin’s office.

“We hope they enjoy the experience fully and walk away with a yearning to return to public service in the future,” according to the emailed statement.

In Lanham’s case, that hope was fulfilled.

“I feel guided to work in Congress. I think their jobs are interesting,” Lanham said, adding that she would prefer to work for a politician rather than hold an elected office. 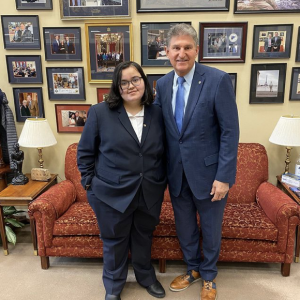