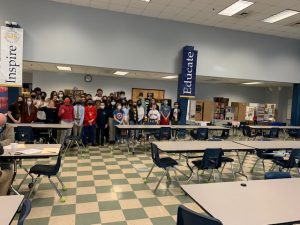 A total of 39 students in grades six and eight participated in the event, which was held in the school cafeteria. The top two in each category qualified to participate in the Berkeley County Social Studies Fair on Saturday, Feb. 12, at Musselman High School.

Following are the winners and the categories in which they competed:

Anthropology: Emma Ashman, first place with “How the Atomic Bomb Affected Japanese Culture”; Braylen Cole, second with “The History of the Baseball Glove”; and Adelaida Rodriguez, third place for her project about tumis. Honorable mention went to Angela Aparicio for “The History of Jazz.”

Economics: Anna McCreery, first place for “Rare, Lucky or Suspicious: The History of the $2 Bill”; and Arabella Cole, second for “The History of Netflix.” Receiving honorable mention were Thu Hoang for “50 Years of Makeup”; Lane Smith for a project about Henry Ford; and Charlie Dunn for “The History of Soda.”

State and local studies: Olivia Rish, first place for “From West Virginia to the Stars”; Bailey Summers, second for “The Good Friday Earthquake”; and Savannah Bischoff, third for “The Trans-Allegheny Lunatic Asylum.”

Political science: Ava Kithcart, first for “The Man Who Made America: Alexander Hamilton”; and Riley Kilmer, second for “The Legacy of Eliza Hamilton.”

U.S. history: Stella Carter, first for “The Beginning of a ‘Sweet’ Life”; Harlan Harmison, second with “What if Lincoln Lived?”; and Victoria Knapp, third for “The Bombing of Pearl Harbor.” Honorable mention was awarded to Lucas Velez for a project about Stan Lee’s career.

World history: Bracha Warui came in first for “The Battle of Verdun”; Brandon Stuart, second for “Roger Federer, the ‘Swiss Maestro’”; and tied for third were Gabriel Campos with “The Great Emu War of 1932” and Colin Atkins for “The Australian Wildfires’ Impact on Wildlife.” Receiving honorable mention were Jaxson Guenther for his project on Legos; Dalton Rose for his exploration of how World War I affected World War II; and Jacksen Soltero for “Is Alexander the Great so Great?”

Judging the entries were:

Cutline: Nearly 40 students participated in the social studies fair at Saint Joseph School in Martinsburg, W.Va. A dozen of them qualified to participate in the Berkeley County Social Studies Fair on Feb. 12.